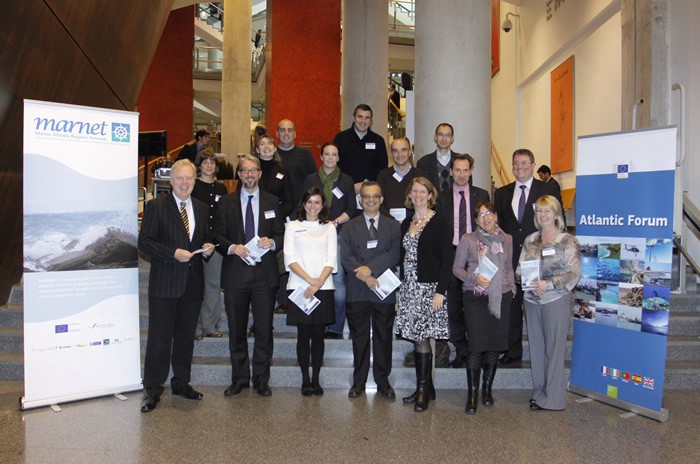 The Marnet Partners announced the official launch of the MARNET project at a major EU Commission Marine conference in Bilbao, Spain.

MARNET (Marine Atlantic Regions Network), is a three year co-operation project involving Regional Authorities and Marine Socio Economists in Ireland, Spain, France, Portugal and Scotland. The initiative will establish an EU Atlantic Marine Socio Economic Network that will map the value of the Atlantic Marine economy through the development of reliable and comparable socio economic data throughout Atlantic Regions.

Speaking at the launch event, Assembly Director Gerry Finn welcomed the EU Commission’s support for the MARNET project adding that :

‘ MARNET is an important development in Maritime co- operation in Atlantic Regions. The availability of comparable socio economic data in the sector is vital to targeting future funds to niche areas of the Marine Economy. As Lead Partner for this initiative, I am delighted that the BMW Regional Assembly is in a position to co-ordinate this exercise which up to this point has not been achieved at an EU level. I look forward to the engagement of Local Authorities and Industry representatives in the project who will identify specific practical initiatives for the sector. This initiative complements the recently launched Marine strategy for Ireland ‘Our Ocean Wealth’ which aims to realise the significant potential of the marine sector to contribute to job creation and economic development in Ireland’

MARNET was presented to over 150 delegates from throughout the Atlantic Region at an EU Forum Conference event in Bilbao, Spain. The consultation seminar was organised by DG MARE of the EU Commision as part of the development of the EU Maritime Strategy for the Atlantic Area. The key note address was delivered by President of the Poitou Charentes Regional Council, Ms Segolene Royal who was a candidate for the presidency of France in 2007.