This activity involved the development of an agreed methodology for the identification, collection and classification of socio-economic data related to marine activities in the Atlantic Area.

There were several difficulties identified in developing a framework for data collection across the Marnet partner regions. These included:

In order to overcome these problems and inconsistencies, the Marnet project developed a coherent framework for a marine economy database and applied a robust methodology for the collection of comparable marine socio-economic data on maritime activities in the Atlantic Area. The framework was developed through the collaboration of partners from member countries, namely France, Spain, Ireland, Portugal and the UK. To ensure consistency among countries, Eurostat statistical classifications are used – NUTS (Nomenclature of Territorial Units for Statistics) for the spatial dimension and NACE for the sectoral dimension of the data. NACE and NUTS have been used for two major reasons: 1) they provide a common standard for the definition of economic activities in Europe in general and in the Atlantic countries in particular; 2) they provide a full coverage of the activities and geographical zones identified as relevant for the Atlantic marine economy without double accounting in terms of business or spatial units.

The data collection framework also had to meet the following criteria across the Atlantic region (Colgan, 2007):

The overall goal was to establish a clear, common and replicable marine economic data framework for European Atlantic regions.

Figure 1 summarizes the Marnet Framework and illustrates the approach taken to identify and measure relevant marine economic and social activity in the Atlantic Area. 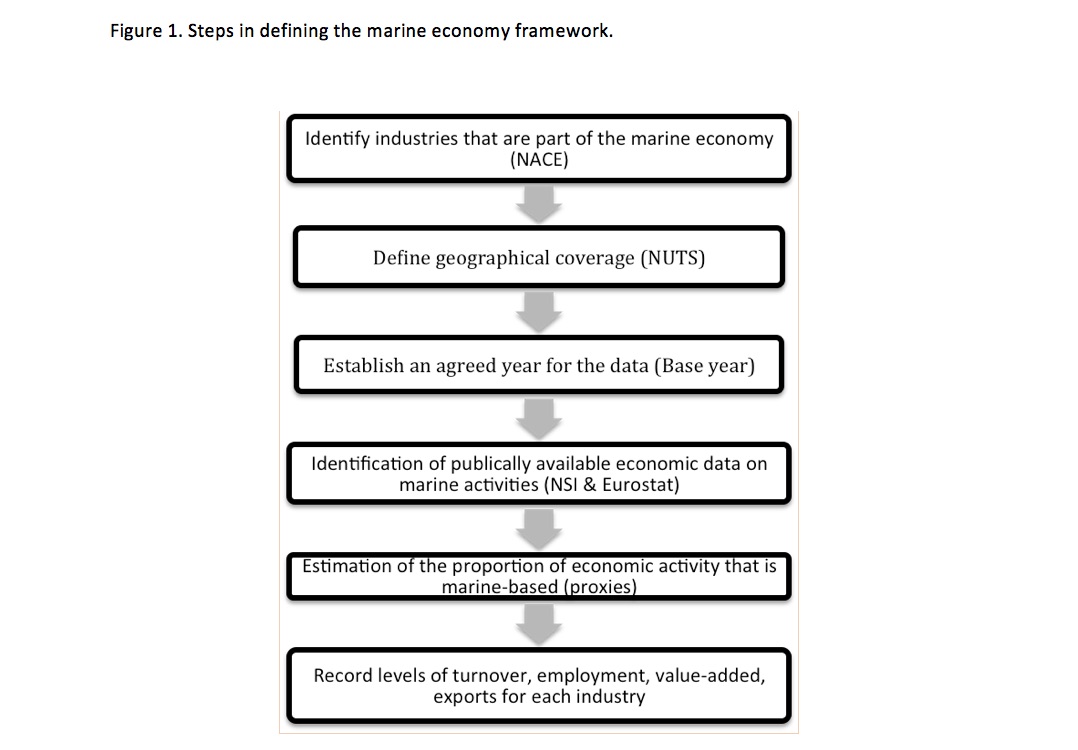 The development process was started in 2013 with the aid of stakeholder participation in each partner region. In the development of a European data framework, it was crucial that there was comparability across the maritime economic sectors and industries. Using the NACE system, activities were divided into marine specific activities (for example, shipping and fishing), marine linked activities and impacted activities (for example, tourism), and then further divided into both fully and partially marine/maritime activities as presented in Table 1. Marnet identified 15 marine sectors made up of a total of 52 NACE codes.

For information on economic indicators within the framework, please see Marine Socio-Economic Indicators.

The release of business data differs across countries, most usually being made available with a two-year (t-2) time lag. For the Marnet framework, it was agreed to take 2010 as the reference year to allow for a complete and comparable representation of the ocean economies across all sectors at the time of the data collection phase. Partners were encouraged to collect previous and more recent data if available.

During the process of developing the framework, certain limitations were identified, specifically:

For a more in-depth discussion on the framework limitations, please refer to Foley et al., 2015